I reckon you could spend a lifetime of weekends visiting somewhere new in New Zealand and you would never see it all. It is that diverse and that exciting. Cities, towns, villages, forests, theatres, festivals, mountains, beaches, rivers, nature reserves, national parks, scuba diving, sky diving, mountain biking, hiking, rafting, sailing, boating, fishing – it just goes on and on.

I am pretty lucky (or I plan well) and have seen most parts of New Zealand but there are a few places I have never been to.

Last week I crossed another one off my list – Whangamomona (pronounced Fong-a-moh-morn-ah). A small isolated village on the ‘Forgotten Highway’. Sounds ominous I know……

Whangamomona is best described as somewhere you need to have reason to visit – you won’t stumble across it. If you did stumble across it however you would not only not regret it but you’d get a glimpse of the way New Zealand used to be. About 100 years ago. And not because it has been re-created as such but because it has just never really changed since the turn of the 20th century.

Situated in a valley half way between National Park in the central North Island and New Plymouth on the west coast this place is isolation plus.

In 1900 it had a population in the thousands. Three churches, I imagine several hotels , the butcher, the Town Hall, the local school all surrounded by tented camps for the workers employed cutting road and rail through incredibly rugged country. It must have been pretty miserable in what can be very wet and cold winters.

The nearest town of any size is Taumaranui which lies about 90 kilometres to the east and is the turn off point to drive into Whangamomona if you are coming down from Auckland.

We were going there for my Uncle’s 80th birthday – he lives with my cousin who a year or so bought the local hotel/pub and is busy renovating it.

The drive in is spectacular. At first the road winds alongside the mighty tree lined Wanganui River that has carved itself ever deeper in to hills that rise as you drive west. Wide valleys that are intensively farmed and cropped provide the view for the initial part of the journey.

It is spring here now. The fields are full of lambs and there is blossom on many of the cherry trees that have been planted around this part of the country. The non-native trees are thick with leaf bud and the Poplar trees that line so many of our highways are tinged with green, readying themselves for the summer that is just around the corner. The banks of this mighty river are dotted with Willow trees which are also now bursting into leaf.

The road then starts to rise as you climb the hills that dominate the landscape for the next 80 kilometres. Somewhere along that road, buried deep in those hills was our destination.

Geologically this is an active part of New Zealand and the hills here are among the fastest rising anywhere in the country owing to the constant tectonic forces squeezing the Earth’s crust. In many parts these hills are comprised of soft mudstone and they rise for hundreds of meters so are both steep and soft. With so much of the forest cover removed more than a century ago erosion is a real issue. After every heavy rain this road is subject to slips and I concluded it must cost the New Zealand taxpayer a small fortune to keep it open. Signs warning motorists to be cautious of rock falls were everywhere. I would not describe it as dangerous but you need to keep your eye on the road.

Which I can tell you given the views as we climbed this seeming never ending series of hills was difficult as the views were nothing short of breath taking.

It is now spring in the North Island and the weather is more settled after the often wild weather of winter. Last weekend was cloudless but cool (16 degrees). As we climbed higher and higher on a road that leads into Whangamomona several things happened – the view got more and more spectacular, the native forests thicker and the road narrower and narrower.

To the south east as you climbed this winding road all you can see is a seriously big and cloudless blue sky, endless rolling hills covered in what I always refer to as ‘juicy’ coloured green grass, hills dotted with the occasional sheep and then sitting parked on the horizon the snow covered peaks of Mounts Ruapehu, Ngarahoe and Tongariro. Stark against the brilliantly blue sky it really did look as though someone had come along and sprinkled these mountains with icing sugar. It seemed as if you could reach out and poke them despite lying about 50km away such is the clarity of the air in this country.

The higher we climbed the more spectacular things became before farm gave in to forest and we were plunged into mature native forest for tens of kilometres.

Here the rock base is hard and the river has sliced them thin creating towering gorges. The road seems in places to cling to their sides.

Shortly before we arrived we passed through the thinnest road tunnel I have ever driven through. Single lane, dark and with sides evidently chipped by hand held pick axes over 100 years ago. If you wound your window down you could run your hands along the walls as you drove (I resisted the urge).

Eventually we made it to the village and pulled up at the Hotel.

Built in 1903, in classic turn of the 20th century Victorian style, this two storeyed wooden Hotel beckoned. The fire inside was on, the air was warm after the chilly early evening air, the walls were dotted with the village’s history – two man hand saws, deer antlers, taxidermied wild boar heads, photos of the local rugby team, photos and newspaper articles documenting the colourful history of the area from the late 1800s till now.

We had a wonderful evening catching up with family and meeting some of the local farmers who with a few beers under their belts were great company. These are a different breed of New Zealander and not the types you’d meet in your local Auckand bar.

Limited internet and no cellphone coverage. Imagine. No cars coming past at all hours of the night as we city slickers are used to. Clear night and a view of the Milky Way that cannot be imagined till you have escaped the light pollution of the city. And quiet. Really quiet. Unnervingly quiet for some. No noise at all when we went to bed but the occasional ‘who-who’ of the Morepork (New Zealand’s native nocturnal owl) and the gurgling of a steam that runs behind the hotel. And that was it.

For those of you living in New Zealand make a plan for a two night stay at the Whangamomona Hotel – the Patrons are vivacious and friendly, their menu is excellent with food cooked onsite from the freshest local produce, the beer is great, the atmosphere is uniquely New Zealand and the room rates should you do the sensible thing and stay a night or two are very reasonable.

More than that you’ll get a taste of the way New Zealand used to be. 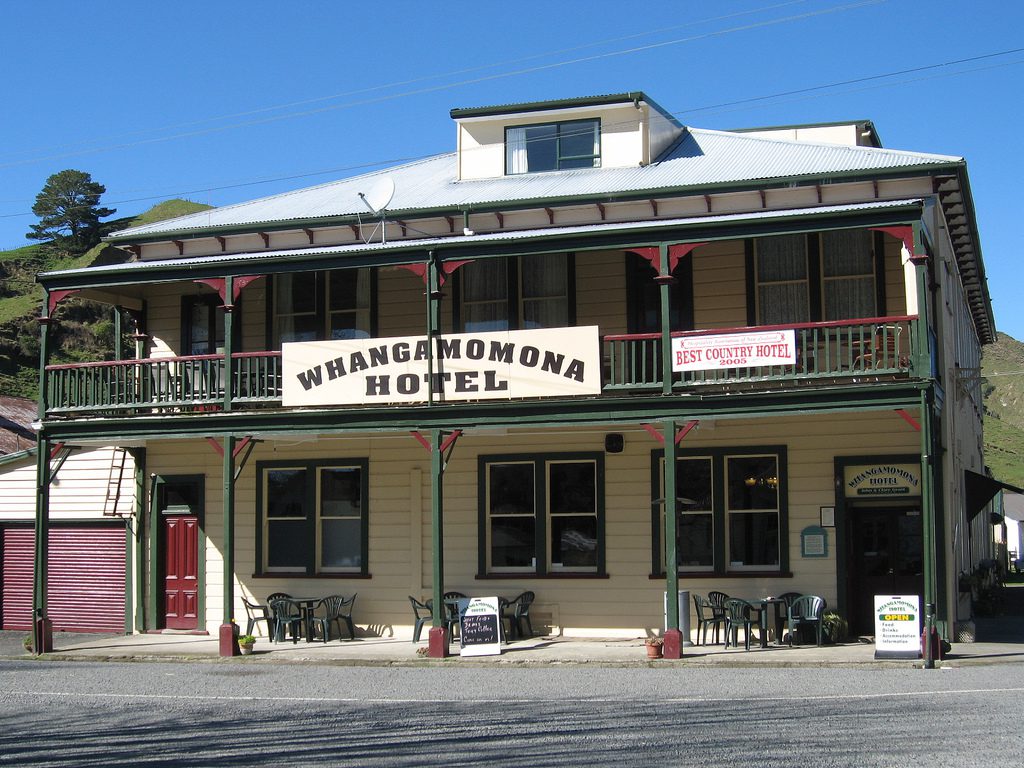