Milford Sound – A Landscape On Steroids

I have waited all my life to get to Milford Sound. Lying in the southwest of the South Island, it is most certainly off the beaten track but every year several thousand extremely fortunate people make the effort to get there and experience it.

Everyone who has been there speaks with a hushed reverence about the place. Down the years I’ve seen plenty of photos of the iconic Mitre Peak and heard tales of a landscape made by giants – deep u-shaped valleys carved out of the hardest rock in New Zealand by rivers of frozen ice, of fjords 400m deep, towering, jagged mountain peaks covered in snow, dense temperate rain forest from the snow line all the way down to the sea. And rain, relentless and in great volumes, making it the second wettest place on Earth.

Nothing, and I mean nothing, prepared me for what I saw when I went there earlier this week.

No photo can ever do the sheer scale of the landscape justice and I’m not sure I am a talented enough wordsmith to be able to describe what we saw in a way that can do it justice either (but check out some of my photos on Instagram…I tried…).

Our day started at 5.45am and we awoke to another still, dark and freezing Queenstown morning with more stars in the sky than I have almost ever seen. The barometer registered -3°C and it would be some two hours later before the sun finally succeeded in climbing above the high mountains made silhouette by a slow emerging dawn. Rather than drive ourselves we decided to take a bus tour and joined approximately 12 international tourists on a luxurious coach which was mercifully warm and provided the smoothest of rides up the shores of Lake Wakatipu, past Kingston and into the western heart of Southland. Two hours in and there lay my first surprise. I had assumed that the trip out toward the coast would be mountainous and forested but instead we initially travelled through wide flat river terraces covered in open fields of tussock-coloured grass. Merino sheep filled some of the vast fields but it seems that farming deer is as big as farming sheep in these parts. There were thousands of them.

For two hours we travelled across these wide river valleys until we reached Lake Te Anau. This is New Zealand’s second-largest lake and is surrounded by Beech Forests. Apparently it has water so fresh that it is 99% pure and therefore more pure than anything you could ever buy in a plastic bottle at the supermarket. We drove parallel to its shores for 60-odd kilometres up the eastern shoreline through a light fog, past occasional farm cottages trailing limp wisps of smoke from rock chimneys.

Emerging on the northern side we started the climb, we left lake and gloom behind and into a big southern clear blue sky day they have so many of down this way and on into the Fiordland National Park.

This is where things started to get more stunning than words can describe. If you can have sensory overload this is where you’ll experience it.

Mountain peaks line both sides of these forested, glacial-formed valleys with almost sheer sides rising between 1,500 and 2,000 metres – virtually straight up. Those of you familiar with the work of glaciers will know that the valleys are not v-shaped as you tend to get when they’re formed by rivers, but u-shaped. At this time of the year (early winter) the sun doesn’t get high enough to warm many of the valley floors. As a consequence, the valleys were covered in a deep white frost, something those of us that live in the north of New Zealand never experience. As the days grow shorter and the nights colder, this frost never sees the sun and so frost in many parts builds upon frost. Pulling over to the side of the road in one of these valleys we got out to experience a seeming endless view of grasses and scraggy shrubs covered in minute ice crystals. Even some of the trees were dusted and sparkling as if someone had cast them in millions of tiny diamonds. It was magical – utterly breathtaking (and breath takingly cold too).

As we approached the Homer Tunnel the road became more narrow and began to wind closer to the edge of the deep valley. Mountains through this part of the park are 3,000 – 3500 metres high and toward their tops, covered in the purest white snow. The valley sides hold little soil so smooth are their sides caused by the grinding of ice during the last ice age. So many of these mountains appeared as if they had been sliced right through with a giant carving knife, leaving a relatively smooth side of almost vertical rock of over 1500 metres in height. Many were steeped in mosses, ferns and toward the valley bottoms, beech forest clinging by their roots to fissures and cracks. Running through these valley floors were rivers of the clearest water you might imagine, over rocks smoothed by thousands of years of tumbling and grinding over and by one another.

From time to time our rare mountain parrot known as the Kea would fly down and could be seen on the side of the road.

Then through the Homer Tunnel, often closed in winter following heavy snow, this marvel of engineering is very steep, took a whole lot of dynamite and was blasted and cut straight through the mountain. We emerged, over 1.5 kilometres later at the head of Milford Sound, a half bowl of ancient rock worn smooth by ice and towering 2000 metres above (and around) us.

After descending the most stunning of drives through verdant rainforest we arrived 15 minutes or so later at the ferry terminal, lined with large cruising boats all ready to take their loads of tourists up the ’Sound’. Having boarded our 30-metre launch with only a few passengers to keep us company, the boat slipped quietly out from it’s mooring and glided slowly across a glass-like Milford Sound toward Mitre Peak which lay several kilometres away.

As we got closer the mountain appeared to grow. Taller and taller, higher and higher. Onboard, necks strained to try and see the top above almost sheer cliffs. Mountain top tickling blue sky literally kilometres up. Without actually shrinking I don’t know how it might be possible to feel any smaller and insignificant. Mitre Peak rose almost straight up 1,650m from the waterline and the fjord below it plunged a further 275m to the bottom of this drowned glacial valley. For those of you familiar with that other spectacular piece of rock, Table Mountain in Cape Town, Mitre Peak is almost twice as high and is surrounded by peaks even higher. All are steep sided with almost vertical cliff faces of some of the oldest and smoothest rocks in New Zealand. Down one face a 1500m gash ran, caused by an earthquake around 18,000 years ago. We were passing right over the main alpine fault that separates the East Australian and Indo/Pacific tectonic plates. This area is closely monitored by scientists and they detect up to 1000 tectonic movements each and every day (of which 99% plus are never felt by anyone, thankfully). This part of the country is being forced relentlessly up to form some of the highest and youngest mountain peaks on the planet.

The word that kept springing to mind was “scale”. And ‘epic’.

This is a landscape on steroids. Unimaginable scale. Until you have been in the heart of Fiordland with its massive u-shaped valleys towering thousands of metres above (and below) you, witnessing hanging valleys, themselves formed by rivers of ice sitting 1500 metres up the sides of the main fjords with 200m high waterfalls cascading over their edges, it’s hard to comprehend just how small it makes you feel. I kept thinking that not too long ago the ice here was over 1000m thick.

It was really brought home to me when I took a photo of a three-masted, four-decked tourist ship that sailed below Mitre Peak. It had been tied up beside us at the wharf at Milford Sound and it was massive. By the time it got out into the fjord and we saw it from the other side of the valley, it appeared to have shrunk until in the end it looked like a toy boat beside the sheer almost vertical wall of rock.

In this part of New Zealand there are 237 days upon which there is measurable rain and they don’t measure the rainfall in millimetres – they measure it in metres and there is 8 of them (that’s 8000mm!).

Having made our way up the fjord toward its mouth and opening to the Tasman Sea cameras clicked incessantly and it occurred to me – not quite a waste of time, but no one will understand the scale and majesty who hasn’t experienced it. Photos simply cannot do this place justice.

Thankfully the ‘roaring forties’ were being very kind to us and there was barely any swell as we poked our nose out into the Southern Ocean before turning around for the return journey.

I know I have not done the majesty and scale of this place the justice it deserves but add this place to your bucket list. Whatever you do, add it.

This is one of those places you simply have to see before you breathe your last. I am told it is even more spectacular when it has received some of that legendary rain but just how much better it might beI cannot comprehend.

It is a very long day on the bus, some 12 hours in terms of the round journey but you do it in comfort, you do it in style, it is affordable and is something which at any price you simply cannot miss. 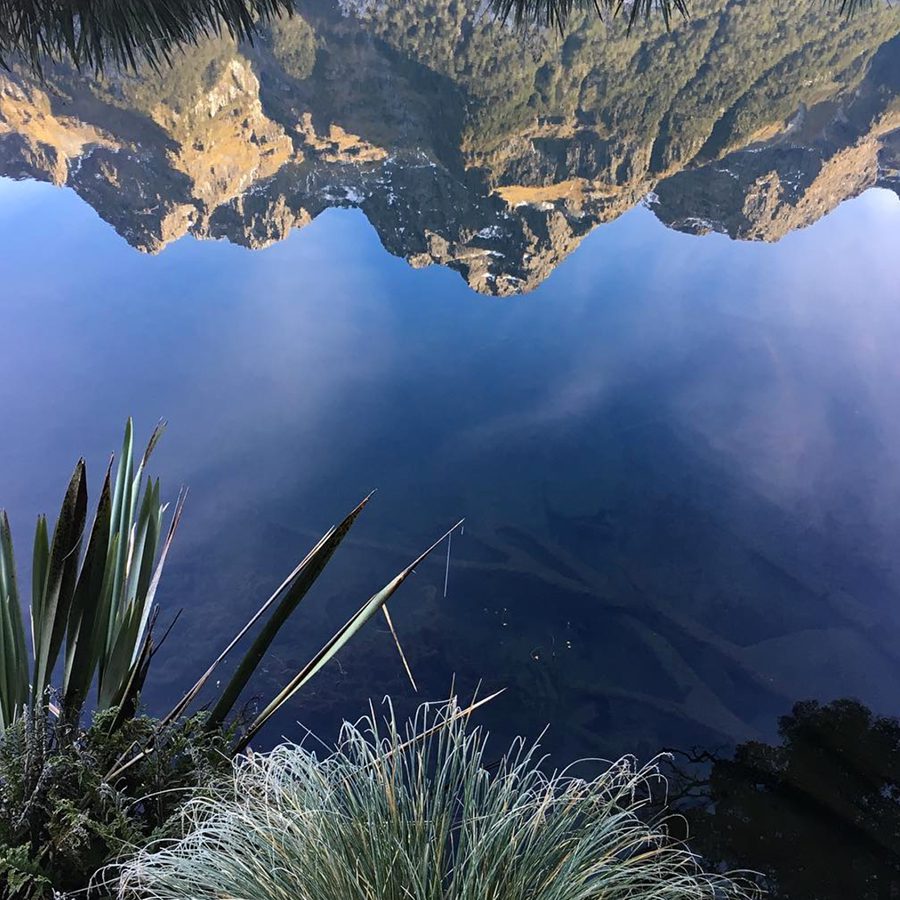