At our seminars and at follow up personal consultations we try our best to describe to potential migrant clients what sort of life they might expect if the Government of New Zealand lets them in. What kind of people we are, as New Zealanders, more or less. Sometimes it is easy to convey the similarities and differences and sometimes less so.

I am this week working out of Barcelona (hey, there has to be some upside to being away from home so much) before returning to South Africa this weekend to give another series of presentations across that country.

Although we have much in common with our European cousins there are some subtle but real differences between city dwellers in this part of the world and New Zealand. Differences you only appreciate when you are far from home.

Before I am accused of falsely tearing any nationality to pieces let me just say differences don’t mean better or worse necessarily, just differences.

For one, it is so crowded across Europe I’d have thought some sort of beach or footpath etiquette might have evolved. I chuckle at how we, as New Zealanders (but my wife in particular), struggle to cope with the indifference shown by others especially on crowded narrow footpaths and alleyways.

Before I come back to footpaths however let’s just talk crowds. It is still high summer here with temperatures in the high 20s and low 30s. Glorious sunshine and perfect beach weather. Not at all unlike the northern most parts of New Zealand at a similar time in our summer. (Miscellaneous fact most of you probably don’t know – Auckland lies at almost the same (southern hemisphere if it needs to be said) latitude as Gibraltar in Southern Spain and north of Auckland actually shares latitude with North Africa – bet you didn’t know that….).

Unlike New Zealand however nothing seems to start here till 11am. Surprisingly in a country not doing very well economically and this being the fourth most popular city in Europe for tourism, they by and large open up at 11am for 3 hours, shut for a ‘well deserved’ rest around 2pm and re-open at 4.30pm before putting in another (presumably) ‘gruelling’ four hours or so before all packing up and going off to drink wine and eating tapas (of which centuries of spending so much time on this most important of daily activities has made the food and wine here both cheap(ish) and excellent.

When our work is done here in Barcelona we have been off to the beach in the early afternoon for a couple of hours. Along with it seems, about a million others. Each grabs what appears to be their own 1.5 square meters of sand, lay their towel down in the sea of cigarette butts that litter everywhere in this part of Europe and sun themselves. And talk extremely loudly in more languages than you could shake a bottle of Coppertone at.

If you stand up and look along the beach it might remind you of those BBC wildlife docos where 45,000 elephant seals are squeezed onto a tiny beach to give birth and to mate. There are a lot of young, tattooed people in this town clearly looking to do the latter if not the former. I have to observe, cruelly I know, there is also an alarming number of European men and women who in size might be mistaken for Elephant seals if their BMI is any indication (do these people really think speedos for the guys and bikinis for the women is appropriate beach attire given their size?). Shallow I know – everyone is beautiful in their own way. Sorry to burst any bubbles but actually that is crap and they should know better.

Getting to the (not very warm) Mediterranean for a dip to cool off requires one to stand up, carefully assess one’s surroundings and search for a way through the prostrated throngs (and prostated thongs). This is easier said than done I have found but what is certain is it never involves a straight line. The 25 metres as the crow flies to the refreshing sea can become a 250 metre five minute trek as you tip toe forward, then sideways, double back, turn left, walk forward, take a big step over small child, tip toe around the male elephant seal snoring and blocking your path, forward three steps toward the ocean, two to the right, five back (being careful to steer a wide berth of the fine young thing sunbathing topless given your wife is two steps behind you), on again toward to the sea…..etc.

Eventually you make it and take your place among the several thousand people cooling off in the sea. And of course the obligatory buff and bronzed young males playing with a volleyball across 30 metres of crowded Med with lots of bellowing and laughter with that ‘look at me, I’m flexing by pecs’ air about them. Subtle it is not.

Making it to the water is a process of gingerly picking one’s way through this sea of humanity trying to flick as little sand as possible on the prone bodies that lie between you and thermal salvation.

Well as New Zealanders that’s what we always do. The locals and the tourists that hail from equally crowded parts of Europe simply appear to make a bee line for the ocean (like baby turtles after they have hatched only much much bigger) and don’t seem to care quite to the same extent as to how much sand they flick over those in their path.

As you can imagine it isn’t like Lang’s Beach where we have a holiday home north of Auckland. There on a busy day and across 1.5km of fine, golden sand at summer’s peak there would be, perhaps, 200 people. On the busiest of days, maybe 500. No wonder people love our beaches. Our peace. Our quiet.

When it comes to footpath etiquette I have laughed at my poor wife who being a good New Zealander thinks about everyone but herself on her journey to find yet another Zara store (‘They all stock different things Iain!’). Fine when you are walking down a suburban Auckland Street. Recipe for marital frustration when in Europe (add Asia to that because we have the same issues when we are there).

Back to human foot traffic. I have noticed that decisions on passing the oncoming human tide on footpaths are made at the final second when collision seems inevitable to me as a Kiwi. To do it any other way just causes chaos. As my wife has learned and we have laughed often about she will change direction to make sure there is no collision perhaps 2.5 seconds before the head on smash with the oncoming pedestrian. This confuses the walker coming the opposite way. They look at her, get this ‘WTF’ look on their face, slow down, step to the left just as my wife steps right, they look at each other, one apologises and the other scowls, they both step the opposite way, one laughs with a bit of embarrassment as the other mutters ‘Imbecile’ in French/Spanish/German or occasionally Chinese (although the Chinese are usually still taking a selfie and oblivious to what just happened) and the passing manoeuvre is completed with little elegance or improvement in cross-cultural relations.

My wife, bless her, doesn’t much care for my ‘adjust-at-the-very-last-second’ approach or my adoption of that ‘I’m not getting out of your way bru’ look on my face (although I always do – I cannot deny my ‘New Zealandness’ any more than she can, despite my bluffing!). My wife is far too polite although I have noticed an increasing frequency of shins being slapped with bulging Zara bags and they are not her shins.

So when we walk down a busy road if it is 500m to our destination we will actually, given the weaving we do, walk closer to 2.7 kilometres. Good for the waistline and means we can have an extra litre or two of Sangria when we are done with the next Zara store. One of the good points about being a New Zealander. You do lots of extra steps toward your get fit and live a longer life programme.

To some however in these big and crowded cities we must seem like village idiots come to the big smoke.

To us, we are just ‘normal’ and dare I add, considerate, Kiwis who never stop thinking about those around us. It’s the way we are programmed. It is in our DNA. 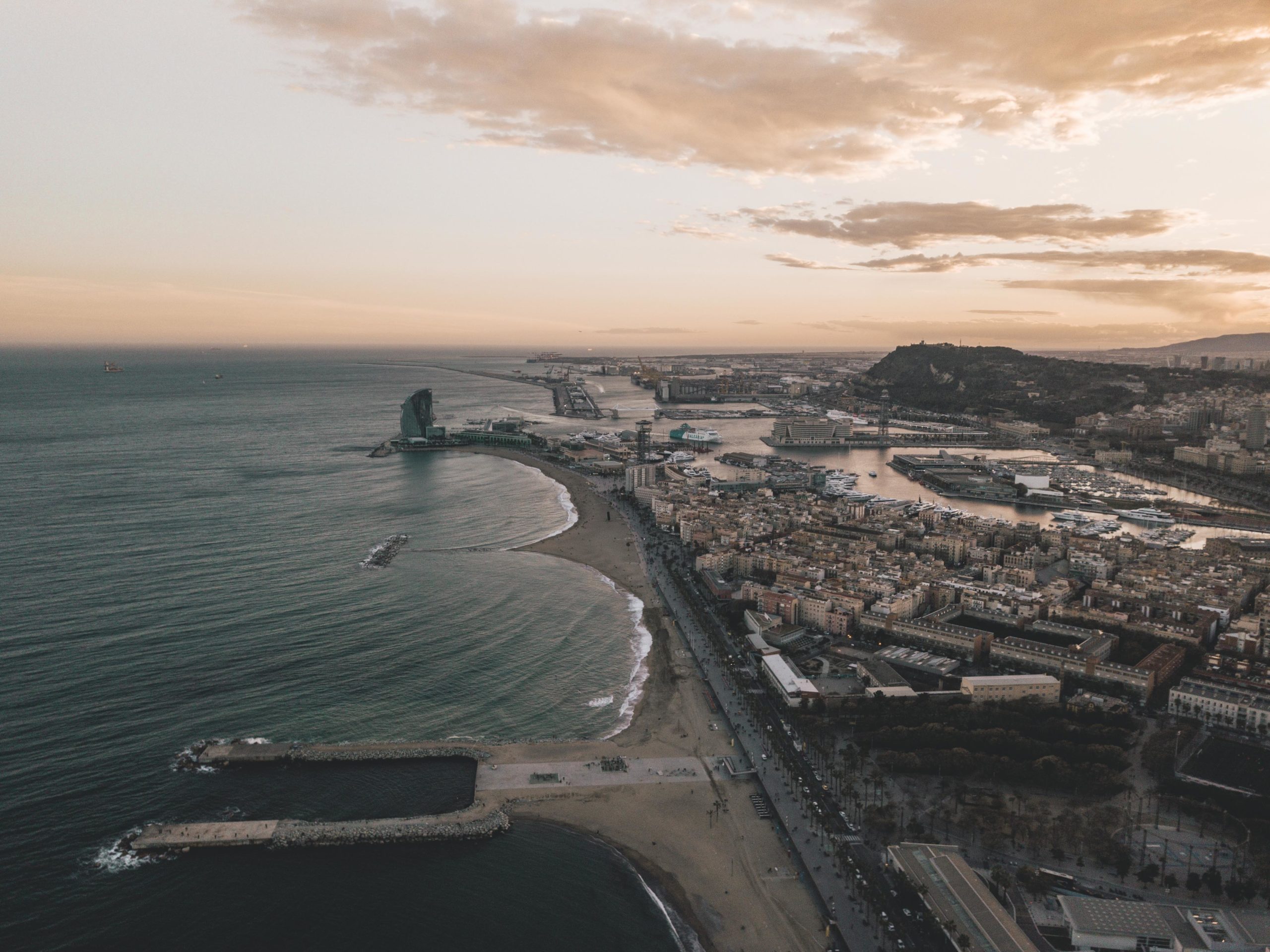