Close Encounters Of The Cetacean Kind

Earlier this week on a cloudless, sweltering summer’s day we decided to take our boat out to Taranga Island; a nature reserve of several thousand hectares that sits 15 km out to sea in Bream Bay. This island and five that lie another 5km to its north east are human free and no human is permitted to step foot on them. They have been cleared of all introduced predators (rats, mice, possums, ferrets, stoats and weasels) and like so many of NZ offshore islands are the only places our native birds can live safely alongside the ancient tuatara and many species of native lizard.

Taranga is an extinct volcano rising 500m to its ancient peak, where several ‘plugs’ stand sentinel, slowly weathering. It is scarred from the occasional release of massive house-sized boulders that crash their way through the forest to the seashore below.

The sea was calm and there was no wind. The temperature was a perfect 26 degrees in the shade.

We passed several little Blue Penguins (NZ is the northern most point of the Southern Hemisphere where penguins live permanently and has several endemic species). This island lies at about 34 degrees south which is squarely in the sub tropics. This might be one of the few places in the world where you can be in the water with both penguins and Loggerhead Turtles at the same time.

We pulled into our favourite cove and anchored in 3 metres of crystal clear water. So clear in fact that the many Stingray that call this part of the island home could be easily be seen as they glided effortlessly across and semi-buried themselves in the sand below the boat. Terracotta coloured kelp swung lazily back and forth from outcrops of rock that half cover the seafloor. Small schools of fish darted from sheltered rock to sheltered rock. Larger fish patrolled. The occasional school of cuttlefish came, hovered, reversed and moved on.

The forest on the island lay no more than 30 metres from where we anchored. It starts above the high tide mark and this forest is mature. Huge, towering trees competing for the light and the very little water that can be found on this island. The birdsong was cacophonous.

I was reminded that nearly 300 years ago when James Cook anchored the Endeavour close to mainland New Zealand, his crew begged him to move the ship further out into the bay as they couldn’t get any sleep, such was the noise — both day and night.

This echo of our past can still be heard on islands like Taranga and with setting aside more and more offshore islands as homes for our endangered wildlife, available for more people to experience something hard to find on the mainland these days.

Having snorkelled and swam for 30 minutes or so (yes, with the stingrays and literally thousands of Salps and non-stinging Jellyfish that made the water like a jelly soup) we had our lunch on the boat. And decided it was time for a fish.

We haven’t been out that much so far this summer and we do like our fresh fish.

You only need to travel a very short distance away from the island and the seabed drops rapidly away. Within 100 metres you have gone from high tide mark to 65 metres of depth. Taranga is, after all, the top of a mountain. At 65 meters very big fish lurk and sharks are abundant.

As there was nothing but the gentlest of breezes and next to no current, I turned the engine off and we threw the lines over and into the deep green.

The fishing, it must be said, wasn’t great and it was certainly slow (but who could possibly care?).

We caught four ‘keepers’ (three Snapper and a Blue Cod) and threw back another dozen or so of marginal size (we have a saying here in NZ which is ‘fish for tomorrow’).

As we sat there I noticed in the distance broken water. This far out, huge schools of small ‘bait’ fish are common and they are in turn commonly chased and hunted by larger fish which at the same time are often chased and hunted by even bigger fish, such as Kingfish. So seeing ‘boil ups’ – fish jumping out of the water to escape a larger mouth bringing up its rear – is nothing unusual.

I thought these must have been pretty big Kingfish chasing this shoal to be breaking so much water… and they were moving fast toward us.

Then I realised. It wasn’t fish but a pod of Dolphin. Nothing strange about that as they are fairly common around this part of the world, but this broken water stretched over an area of about 1000m. And back behind those leading as far as the eye could see.

Within two minutes they were breaking the water either side of the boat in numbers I had never seen. Mothers and calves. Juveniles. Adults. Jumping out of the water and landing back in an explosion of water. We could even hear their high pitched calls as they communicated with one another.

And then I realised they weren’t all Bottlenose Dolphins but there was second species, also made up of mothers and calves and these were much bigger. The largest Bottlenoses I have seen look like they could be up to 3 meters long. These round headed liquorish coloured animals however were even bigger. The largest I would think would have been closer to 4m (and when you are sitting in a six meter boat, that’s pretty big). There seemed to be as many of them as Bottlenoses.

I don’t know what the other species was but the two ‘tribes’ were clearly travelling together (and it appeared by the speed they were travelling, late for a rock concert or something).

The incredible thing was they just keep coming. Five minutes became ten. Ten became fifteen and still they came. In numbers I have never seen.

The final group didn’t try and give a wide berth to our stationary boat; they came within touching distance and a number streaked past straight underneath us. They seem to have rolled over onto their sides and looked up as they did so, revealing their pale undersides for literally a second, seen and gone in a blink of an eye.

I have no fear of these animals (had I known there’d be several hundred of them going to pass us for so long I’d have slipped into the water with them) but when a 3 meter dolphin barrels under your boat at a great rate of knots…it is certainly an experience.

Within minutes, they were gone. Disappearing in front of a wake of churning water.

No idea where they were going (beyond south) and they clearly weren’t hunting.

But they were certainly on a mission.

Needless to say we caught no more fish. We returned, silent and feeling pretty awestruck (and feeling very lucky we live in this country) to the island for another swim before making the 20 minute journey back to the mainland. In silence for the most part.

There is nothing like an encounter with these magnificent sea creatures to really cap off an almost perfect New Zealand summer’s day.

And you know what? In New Zealand we almost take these encounters for granted.

Almost, but not quite. 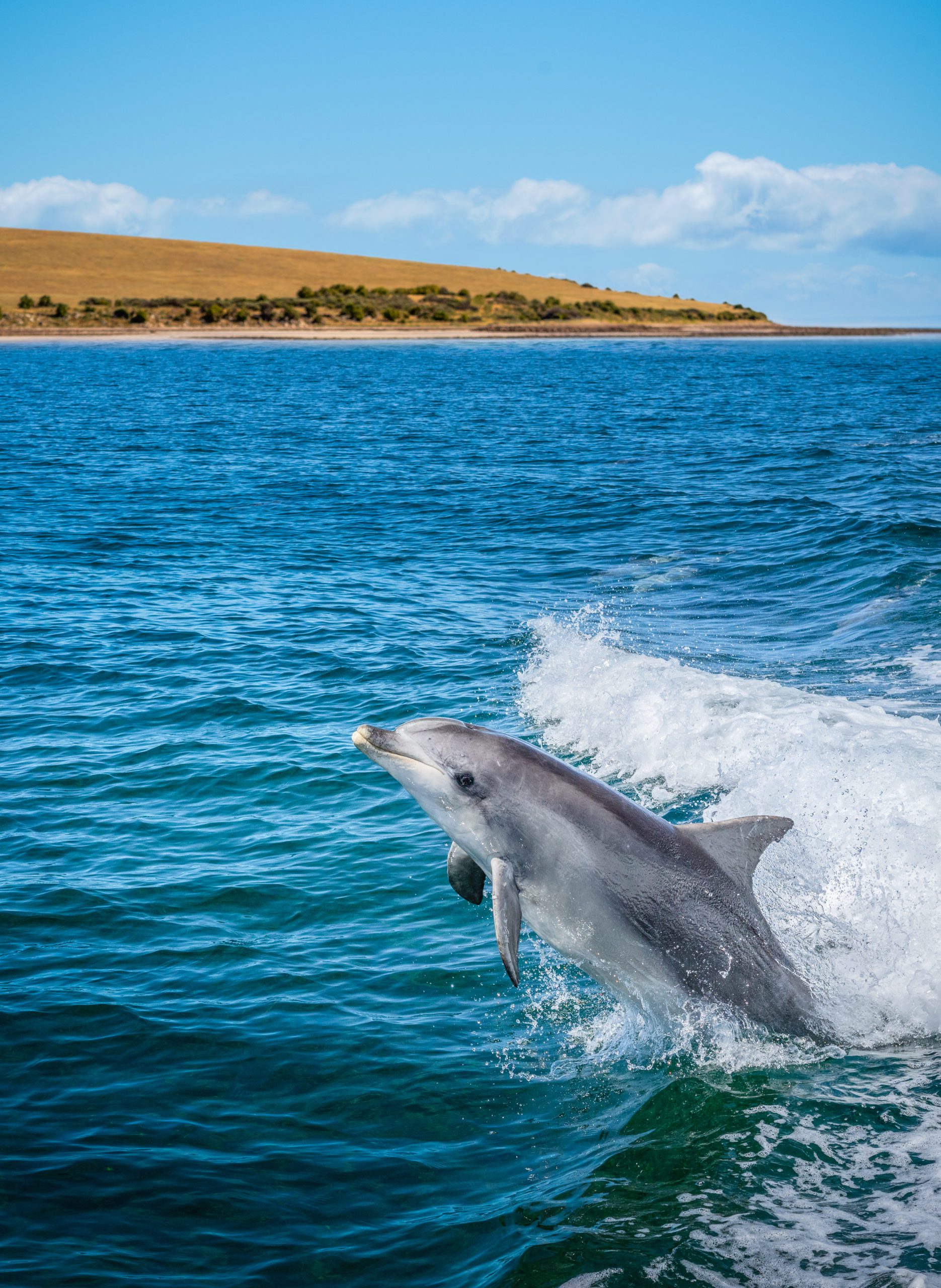